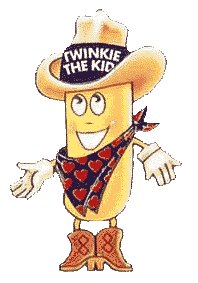 The legal team at In A Word have uncovered a rarely used defense in California murder cases. It is called the "Twinkie Defense." I seems in the late 1970s (when the world was still unaware of the potential mind altering side effects of a Twinkie) a former San Francisco city supervisor, Dan White, killed the mayor of San Francisco while hopped up on a Twinkie overdose. And now, a scant 28 years later another Twinkie case has popped up in California courts. However, this time the killer was high on meth and heroin.

If California is any example of brilliant legal precedent, then it high time the nation realizes the dangers of a "golden sponge cake with a creamy filling." My God, what is the world coming too? Have Twinkies been replaced by meth and heroin by the current drug users of this nation looking for a quick fix? In A Word has unconfirmed information from an unidentified source that today's teens are taking Twinkies while chasing then down with a 20oz. of Mountain Dew. One can only shudder at the effects this will have on our society as a whole.

As an emergency precaution, In A Word is calling for a nationwide ban on Twinkies. For the love of your country please switch over to Zingers, the delectable treat from Dolly Madison.
Posted by Jeremie Jordan

'In an effort to spare his life, Camacho's defense team argued that the defendant suffers from psychosis brought about by a long addiction to heroin and methamphetamine – and was unable to plan the killing.

In his final comments to the jury, prosecutor David Rubin called that "a modified Twinkie defense."'

You have a creative mind, jordan. Join us. Use your creativity for the people, and not for the dark side.

I say this because your most recent posts and comments seem to refuse evidence, and refuse to take on pretty blatant facts.

You run a good blog, but the content is a bit off. This "Twinkie Defense" is a great example of your creativity trumping fact: the PROSECUTION called it the Twinkie Defense. The Defense Attorney was arguing that the Defendant was high on heroin, not Twinkies. The Prosecution attempted to belittle this argument by calling it the Twinkie Defense. Does anyone see the difference between Twinkies and Heroin?

By the way, being high on Heroin would not get a "not-guilty" verdict, it would just lower the count from pre-meditated murder to whatever the California 2d degree murder is.

In sum, the "Twinkie Defense" here had nothing to do with Twinkies, but the Prosecution CALLED it the Twinkie Defense in order to get the Defendant convicted of pre-meditated murder.

Good sarcasm is wasted on some people.

Hey, thanks for reading the wikipedia article on the Twinkie defense.

It was a joke, you know sarcasm.

I mean think about it... Twinkie defense it is fun just saying it.

However, Capo Rock thanks for taking the time to help my readers understand.

I, frankly, don't care about the Twinkie defense or the cases it involves. I just think it was a funny story.

It was a light hearted post. Damn man not everything I write needs to be riped apart. I am guessing Camacho was a great man you admire and he must have needed your defense of him.

Just so everyone knows...I didn't properly represent the facts in the Camacho case. I twisted them a bit to have some fun. If anyone was using this website as a resources for the facts in this case, I apologize.

Public Servie Announcement: If In A Word writes about Twinkies, chances are I am not being serious.