Harsh and Cruel, These Are Just A Few Of My Favorite Things 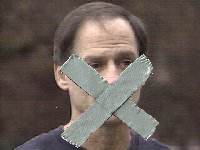 Following the promotional stunt to draw attention to himself, the American bonehead Atheist Michael Newdow has now decided to wage war on good taste. As the reviews of his one man play roll in, I will let the Sacramento Bee say what I wanted to say:

"But [Newdow's] budding musical career, which he put on display in a one-man show before a sparse audience Tuesday night, may be cut short by, of all things, lack of God-given talent."

Ouch, suppose he will sue the Bee for using God in his review?

My pocket watch says his fifteen minutes are coming to an end. And to that I say "Amen."
Posted by Jeremie Jordan