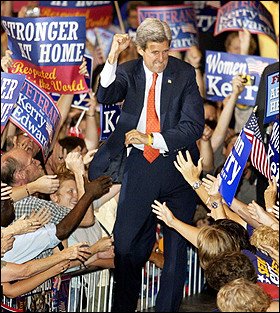 John Kerry coming off a Presidential defeat, rebounded with a clear victory in his bid to be jury foreman. "As far as I am concerned it is a mandate victory, the other eleven people have basically given power to push through my agenda as I see fit," Kerry (pictured during a victory rally) exclaimed beneath streaming confetti and balloons.

He also added "today we tackled this drunk jaywalking case with a clear vision of the future."

As an interested in side note, consider this quote from the article:

"I just found him to be a knowledgeable, normal person," said Cynthia Lovell, a nurse and registered Republican who says she now regrets voting for President Bush in last year's election. "He kept us focused. He wanted us all to have our own say."

Exactly what did being a registered Republican who say she now regrets voting for Bush have to do with Kerry being elected Jury foreman? In A Word Media Watchdog would like to know...AP News has some explaining to do.
Posted by Jeremie Jordan