On The Campaign Trail For History 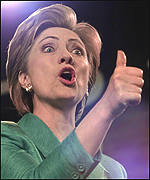 Ever vigilant about his place in history, Bill Clinton (pictured) stepped up his campaign to rewrite the past yesterday in Dubai, United Arab Emirates. In the friendly confines of the Middle East, Clinton successfully undercut the current administration and our troops.

Remaining true to his campaign bullet points, President Blue Dress, went on to say "it was a big mistake. The American government made several errors." Yes, truly. However, I believe the error(s) President Whitewater was referring to was not capturing Osama Bin Laden when he was presented to the United States by the Sudan government.

Not that he is a military planner, but he plays one on TV, President "Is" went to say it would have been better if the United States had left Iraq's "fundamental military and social and police structure intact." Yes, that would have been a good idea...had the country not been run by a brutal dictator. What President Hand Job is trying to say, that if he was still the President he would have waited until Iraq created its own democracy with a finely tuned police force, social equality, and a military willing to surrender to the US before he would have invaded. He even a had a name for it...Operation: Wishful Thinking.

In his usual ability to understate the facts, Clinton said the United States had done some good things in Iraq: the removal of Saddam, the ratification of a new constitution and the holding of parliamentary elections. You think? The removal of a murderer who killed thousands of people, yeah that seems good. The ratification of new constitution to form the Middle East's first true democracy seems decent too. The holding of parliamentary elections on the surface looks nice, but I do feel bad as an American to be subjecting the Iraqi people the torturous advertising that accompanies election time. Unfortunately, someday they too may actually elect someone like President Cheat. The beauty of our system, however, is that they should be able to sue us for restitution some time in the future.

To further his legacy campaign, Clinton said he would traveling to other Islamic states to further degrade the US and ruin troop moral in Iraq. Don't worry, the In A Word Politcal Insider will be there when he puts his foot in his mouth with up to date coverage.
Posted by Jeremie Jordan