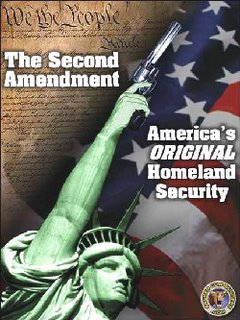 Spitting in the face of history, San Francisco decides to ban hand guns. The citizens of San Francisco may want to vote on more funding for their schools, as their general public seems to be uninformed about a little document the rest of country cherishes called the Constitution.

Anyone know what one of the first things Hitler did in Germany? Anyone? Anyone? Bueller? That's right, he outlawed guns and confiscated them!

To all the people that say the police will protect them and they don't need a gun, I point to the fine New Orleans PD as a prime example of why I need the right to bear arms. In fact, it slays me that in a state where natural disasters are a way of life, that Californians would gladly give up one of their basic rights as an American.

I, for one, do not gladly give back rights granted to me by the founding fathers.
Posted by Jeremie Jordan