A Bridge To Nowhere 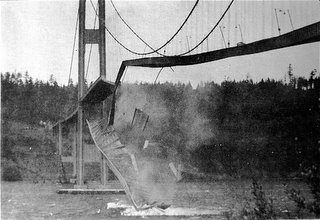 Alaska is set to receive $941 for transportation projects from the federal government and the nation's taxpayers. The worst of the pork spending is the creation of a bridge that connects 50 people on the island of Gravina to the 8,000 in the town of Ketchikan (which is already serviced by a ferry). Don Young (R-Rep Alaska) said the bridge "will be a huge boom to an otherwise struggling economy." You think? The total spending bill will bring $3,206 of pork to Alaska for every man, women and caribou in the state.

When congress decided to re-address the issue in the face of the mounting needs in New Orleans from the destruction caused by hurricane Katrina, Ted Stevens (R-Senator Alaska) fought to keep the money for Alaska. Forget the fact that the Anchorage Daily News had citizens calling for the state to give back the money to help New Orleans, Stevens and Young stood firm.

In fact Stevens went as far as to make this quote: "I don't kid people, if the senate decides to discriminate against our state--I will resign from this body."

Sounds good to me, Ted. Get your resume ready...

But no, we (as a nation) were really close to redirecting the money where is was needed and getting rid of a grandstanding senator at the same time. However, congress voted against the amendment to divert the funds on a vote of 82-15. Ew, so sorry no common sense today...
Posted by Jeremie Jordan

Ive got an idea that will be a "boon for the Alaskan economy".

Drill ANWAR. Every state wants oil right? Its like having grove of money trees.