Put Up Or Shut Up 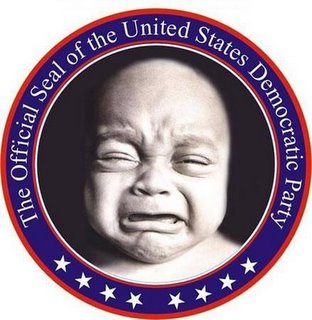 The US House Republicans struck back at their counterparts with a resolution to immediately withdraw or troops from Iraq. In a political game of stare down, the Republicans dared the Democrats to stand behind their rhetoric. However, when it comes to a voting record in favor of leaving Iraq, only 3 Democrats will be able to make that statement as the resolution was narrowly defeated 403 to 3.

Not happy when having to play on the defensive side of the political game, Democrats sounded back. Murtha "introduced a bill yesterday that I don't entirely agree with . . . but to take his proposal and trash it, trivialize it, is . . . Beneath contempt," said Rep. Jack Spratt (D-S.C.).

Beneath contempt, Mr. Jack Spratt (if that is your real name)? How about the daily attacks from your party on the current administration calling for the withdrawal of forces in Iraq? Do you actually want to that? I guess, according to Mr. Spratt, it is fine to go around all week along and talk about how we need to leave Iraq to any newspaper that will listen. However, to actually have a position and do something about it, is completely different.

I've got an idea. How about the Democratic party shut its' collective mouths until they actually have a plan. Soap box speeches are getting tiresome. Remember Bush's approval rating is 37%, but Congress' is 35%. So, simply math tells us the citizens of this country don't exactly believe congress has all the right answers.

How about a couple of comments from our troops:

Or a from a Marine Colonel who spoke with Rep. Jean Schmidt (R-Ohio),

If you are tired of soap box speeches, perhaps you should step down from yours...

First I don't run the country.

Second, the Democrats openly admit they don't have a position or a plan.

Third, it is a blog. Isn't that what a blog is all about? It is my soap box. People can either read it or not, I am not shouting it in their faces.

And lastly, nice job of standing up for your comments, Anonymous. If you have come to play in my neighborhood, you had better stand up for yourself.