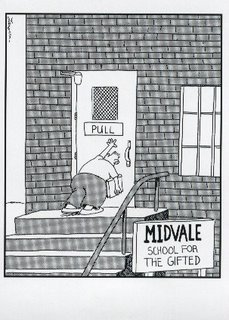 We are sorry to report after years of failing health, common sense officially died in California on Tuesday November 8, 2005. The death of common sense was not a surprise to the rest of the nation, as Californian's lifestyle has made for a very hard life. Two years ago we believed California was hopefully on the road to recovery when they elected Arnold Schwarzenegger to be their governor. Sadly, however to proved to be too little too late.

The last few moments of the life for common sense were horrific. Those readers that live in healthy common sense areas of the country may not be able to handle the graphic nature of its demise. You may wish to stop reading now, as California is/was a disease and we don't want to take a chance that it might spread further into the nation's heartland.

Tuesday November 8, 2005 started as any normal election day with an overabundance of promise. First up was Proposition 73 which would have required parental notification for minors having abortions. Common sense began to fade, however, as Californians voted to make it possible for an 11 year old girl to end the life of her child without her parent even knowing about it. Forget about that same child needing parental consent to have her appendix removed or to be able to ingest aspirin during school for a moment, California thought it a good idea to remove the parents even further from the child's life at a time when the child needs them the most. Opponents called it an attack on "teen safety." The life of common sense began to fade as the proposition had an exception for immediate health safety of the child.

As common sense began to experience shortness of breath, proposition 74 came before the voters. Prop 74 called for the lengthening of the time it takes a teacher to became tenured from 2 years to 5 years. A normal American understands you shouldn't necessarily guarantee that an employee can not ever be fired after just two short years on the job. This was not an attack on teachers as the oppositions would have you believe, but rather a common sense proposal to make sure we have the right people teaching our children (not just union people).

Now on artificial respiration, common sense began fading fast. Proposition 75 called for union members to have access to how the union spends it money. The union leadership called it "paycheck deception," and in a stunning bit of irony voters where deceived into voting against Prop. 75. Unions can still secretly spend dues on whatever they want without disclosure.

As common sense went into cardiac arrest during proposition 76 that would have a created a state spending cap. Common sense tells the rest of the nation and a majority of the states that someone should not spend more money than they receive in tax revenues. The opposition called it a "gut to school funding." Nowhere did proposition 76 state that if California could not achieve its' overall budget, that the education budget would be first place lawmakers would go to recover the money shortfall. Rather than use what little common sense Californians had left, they chose to believe the lies and deception of the opposition.

Common sense officially died on proposition 77 which called for a retired panel of judge to handle the redistricting of voting precincts. Instead, Californians believed it to be a better idea to leave the redistricting in the hands of the politicians (you know the people that actually have their jobs due to current district lines). Why have a non-partisan committee decide something that should be void of politics, when ultra-liberal, Democrat politicians could do a more biased job?

We, at In A Word, are calling for the immediate quarantine of California. The state is much like an area after a nuclear blast and should not be inhabited for many years. California truly became so "open minded" that their collective brains finally fell out. If you live in a state with a healthy common sense, please care for it and let California be an example of what your world will look like it if it dies.
Posted by Jeremie Jordan

We should not dismiss an entire state so easily. While reasonable minds may disagree, it seems Californians may have been right about some of those props. And on the others: it was the will of the people.
Also, you did not discuss prop 78 and 79 (the prescription drug discounts) or prop 80 (energy regulation).