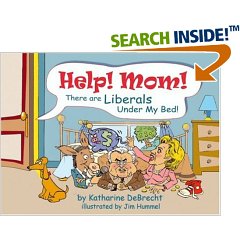 Since there was nothing pressing in the nation's politics yesterday, Hillary Clinton decided to defend herself against the book "Help! Mom! There Are Liberals Under My Bed!," by Katharine DeBrecht. In the book, Clinton is depicted as Congresswomen Clunkton who is trying to shut down a children's lemonade stand for having too high of sugar content. Yes, you can laugh, it is that funny.

In a perfectly executed bit of playground etiquette, Clinton staffers pulled off a brilliant "nanny, nanny, boo boo." "Can't wait for the sequel, Help! Mom! I Can't Read This Book Because Republicans Have Cut Literacy Programs!" Clinton's spokesman Philippe Reines fumed recently in comments to The Hill newspaper while sticking his tongue out.

Not understanding sometimes you should just let a bad joke die, Reines went on to say "it's not the liberal under the bed that they should be worried about, it's the sales that are in the basement."

Ewww, so sorry. Not only was that not funny, it isn't true. "Help! Mom! There Are Liberals Under My Bed" is the topping selling children's book at Barnes and Noble, and right behind "Harry Potter and the Half Blood Prince" on Amazon.com. I am sure the sales are no doubt being helped by the attention that Clinton herself has brought to the book. And that, my friends, is the beauty of the American system.
Posted by Jeremie Jordan