Stupid Is, As Stupid Does 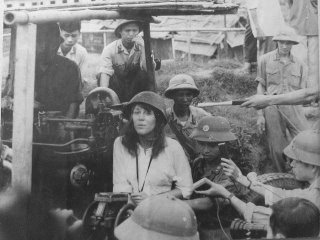 In an attempt to relive the old glory days of the hippy 1970s, the Democrats have hysterically started running to the nearest microphone to scream to the nation we "must end this war." With the some stupid Bob Dylan song playing in the background, Rep. John P. Murtha (D-Pa.) took to the airwaves to today to demand the immediate withdrawal of troops from Iraq.

"The war in Iraq is not going as advertised," Murtha, 73, said in a Capitol Hill news conference while flashing the peace sign to the cameramen. Murtha went on to say the Democrats were toying with idea suing the armed forces for not giving the nation a war as "advertised." The Democrats have become increasing intolerant of war strategies not going as they were working out on paper. A congressional hearing as been called and troops are starting to be questioned by Democrat leaders on why they aren't killing and dying as outlined in the pre-war advertising blitz. Murtha went on to say that American consumers deserve to get the war they paid for!

A clearly upset Ted Kennedy also took to the nation's airwaves to try and gain back some of the thunder Murtha had stolen from him. Ted Kennedy found the closest microphone and apparently said something pro-Democrat, but as of press time the rest of the nation wasn't listening so we don't have any transcripts.

As someone who us born after the Vietnam War, I can tell you I want to see this war to end. I believe Vietnam was the biggest mistake in this country's history, but only because we didn't finish the job. We tried it the tree-hugger way in the 1970s, this time lets finish the job. Don't make the 2,000 lost US troops lives meaningless. If we leave now and the country falls further into chaos, then those 2,000 soldiers will truly have died for no reason. The troops in Iraq have made it clear they want to finish the job. I say give them the resources they need and let them.
Posted by Jeremie Jordan