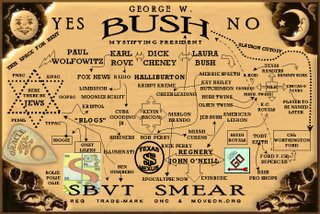 When every event that occurs throughout the world is a conspiracy, how do you know what is real and what is fake? Well you listen to the liberal left of course, because apparently they hold some magic talisman that allows them to see the truth that conservatives could otherwise not detect.

The leftwingnutosphere has been a buzz with the idea that the foiled 8/10 terror plot in England was just a ruse by two of the greatest practical jokers the world has ever known, President Bush and Prime Minister Tony Blair. According to Andrew Sullivan this fake bust on an "alleged" terror ring was nothing more than a diversion from the greatest Democratic primary victory ever and to steal Ned Lamont's thunder, overshadow Israel's defeat, and the mask the Iraqi quagmire:

I wonder if Lieberman's defeat, the resilience of Hezbollah in Lebanon, and the emergence of a Hezbollah-style government in Iraq had any bearing on the decision by Bush and Blair to pre-empt the British police and order this alleged plot disabled.

I wonder a few things also, Mr. Sullivan, but they all deal with white coats and padded cells.

Give me a break. How about spending less time thinking every action by the Bush administration is some deep, dark sinister conspiracy? And instead of complaining, how about offering a few solutions? A novel idea I know, but I am just throwing it out there...