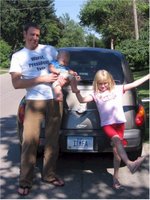 It seems Glen Keenan is upset because the state of Iowa wishes him to turn in his personalized plates which read: "ITMFA."

"I don't know what to do, but I don't think so," said Keenan, a lifelong Iowan from Jefferson County. "It's not an obscene message. I really don't understand why I wouldn't be allowed to keep them."

Oh, Glen understands why he can't keep them, he's just playing dumb [or maybe he isn't playing?]. You see the ITMFA stands for "Impeach the Mother Fucker Already." If you have your tin foil hats handy you can visit their site here.

"I don't know what the big deal is with mine," said Keenan, 41. "My plate isn't vulgar. It's simply a series of letters than can mean any number of things."

"Sure," he said. "It can mean 'Impeach the Miserable Failure Already.' Or it could mean 'Information Technology Masters Fine Arts.' You could think of lots of things. I mean, any vehicle with an 'F' on the license plate could be objectionable to somebody."

No, Glen it's called intent and you know it. However, I actually hope he gets to keep his childish license plate, because websites like ITMFA.com do more to hurt people like Glen and their own credibility. No sane person would take anything Glenn Keenan has to say seriously. He has and will continue to ruin his own reputation. I say, let him continue to do so. Besides, when was the last time you acted on what you saw on a license plate? "Hey, that PT Cruiser has a license plate that says impeach Bush. You're on plate, let's do it! I always let thin pieces of metal screwed to a car do my thinking for me."

However, what makes Glenn my nomination for In A Word's Cordless Power Tool of the Week, is the fact that he poses with his children next to his political slogans. That's just great Glenn, how about letting your kids be kids without using them as pawns. Time to grow up you SMF [which of course could stand for my "super mature friend," but then we both know it doesn't].