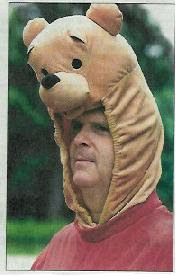 ***He's overstocked with 2007 endorsements, political favors, and back room deals. Campaign staffers? He's got it. Union ties? He's got it. A last name that sounds like a pickle? He's gooooot it!!! Everything has got to go as the 2008s are arriving daily. Tom Vilsack's cRaZy, insanE blowout endorsement sale, where you don't have to be a rock star...just a carpet bagging, corrupt Senator from New York. Come and get it...***

Vilsack endorses Hillary Clinton at the same time the Clinton campaign pays off Vilsack's remaining campaign debt. But don't you for one second believe the two are related. Don't do it! I told you don't...stop it...these are two honorable up standing citizens with loads of integrity so if they say it isn't quid pro quo then it isn't. I said stop thinking those thoughts...

"One thing's got absolutely nothing to do with the other," he said. "They've known each other for years. If she weren't running for president, she'd be doing whatever she can to help retire his debt."

Now Christine Vilsack's endorsement on the other hand...
Posted by Jeremie Jordan