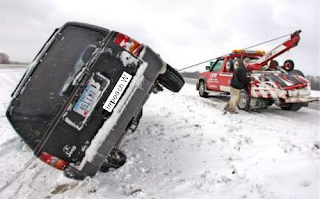 Des Moines [CBB] - Iowa governor, Chet Culver, has declared martial law after two straight days of global warming sent his rural state into chaos. National guard units have been dispatched to quell violence in ordinarily quiet farming communities, but their attempt to provide assistance has been initially met with gunfire and heavy resistance.

"We have reports of multiple instances of guard units exchanging rounds with farmers who are holed up in their grain silos," Lt. Mike Brown said while assessing the mob rule that has over taken the small town of Battle Creek, "it appears we may have made a tactical mistake by imposing a curfew as it seems the canceling of bingo night is what lead to the increase of violence."

Gov. Culver called on the national guard to impose martial law after looting of Dekalb hats and bib overalls were reported at Tractor Supply Co. stores across the state. Fifteen inches of global warming over a 48 hour period seemed to bring out the criminal element.

While the national guard tries to regain order in the sleepy agricultural state, many local leaders are starting to question why the federal government and FEMA were not quicker in providing assistance.

"Clearly George Bush does not like pasty white people," state senator Joel Rustin [D] said during a Friday afternoon press conference held inside the Des Moines green zone, "The White House clearly underestimated how Iowans would react [concerning the rising levels of violence] to not being able to have their morning coffee down at the local COOP."

The massive global warming storm has even garnered international attention, sparking outrage and abolishments from foreign countries. The French newspaper Le Progres wrote an editorial ripping the Bush administration's disaster response by writing "Global warming has shown that the scarecrow has no clothes and that the world's superpower is powerless when confronted with nature's fury." Le Progres went on to say it was "disgusted" that Iowa is still allowed to use a French word for its' captial, Des Moines, "in light of such incompétence."

In an attempt to quell the partisan rhetoric Gov. Culver took to the airwaves with a message of hope and optimism. Culver said both state and federal emergency response would be "one of the many things analyzed in the coming months, but that now was the time for rebuilding."

"I don't care what the people are saying Ames or wherever they are, this state will be vanilla by the end of the day."
Posted by Jeremie Jordan

If you want to write an article start by using facts and the right words. Your readers would be very confused. "Fifteen inches of global warming over a 48 hour period" Couldn't happen. And even then wouldn't be a big deal.