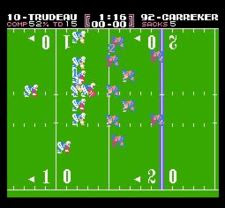 Thanks to the Virtual Console on my Nintendo Wii, I am once again the Tecmo Bowl champion as my Chicago team beat the snot out of New York. Unfortunately the players names have been removed and it isn't Tecmo Super Bowl [which is a far superior game], but the game brings back so many great memories it was worth the $5 download fee.

Yes, that's right I played 10 straight games on Tecmo Bowl, an almost 20 year old game, to be the Tecmo Bowl champion. Every once and awhile you have to prove your video game geek bona-fides.

Here is a link so you can Tecmo Bowl again.
Posted by Jeremie Jordan