The Sun Identified As The Leading Cause Of Global Warming 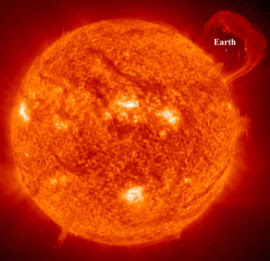 The International Panel on Climate Change is set to issue its' report to the United Nations this week on the primary cause of global warming.

"After excessive research it has been proven without a doubt that the Sun is the leading contributor to the rising Earth temperatures," the IPCC paper reads, "eliminate the Sun and you eliminate global warming."

Coming as no surprise, most of IPCC's heaviest criticism was leveled at the Bush's administration's pro-Sun policies as the report calls on the United States to abandon it's reckless sun loving ways. White House spokesman, Tony Snow, called the report's assessment of the Sun "a lot of hot air...in fact mostly hydrogen and helium."

"No Sun means no photosynthesis and no life," Snow said during his daily news briefing, "like it or not sometimes you have to live life with the Sun you have and not the less harmful Sun you wished you had."

It goes without saying that the IPCC report has received wide spread acclaim among the Hollywood liberals. Celebrities like Alec Baldwin and Barbara Streistand have joined forces to form a non-profit organization called "Stars Against Stars" which advocates the "complete destruction of the Sun and its' complexion and skin destroying UV rays."
Posted by Jeremie Jordan