Sweetness On The Court 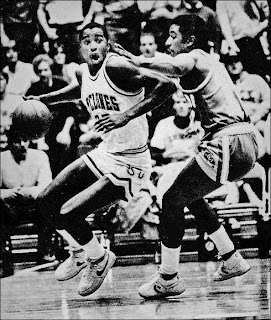 Iowa State basketball great, Barry Stevens, died Wednesday at his home in Indiana. Along with Ron Harris and coach Johnny Orr, Stevens help ISU go from a perennial loser to a regular NCAA tournament contender. Stevens was my first favorite Cyclone player. The flashy dunks and the silky smooth stroke from deep in the corner...Stevens was a fast streaking ESPN highlight film.

Although replaced by Jeff Grayer as ISU's all time leading scorer, his impact on Cyclone basketball will never be forgotten.

From the Des Moines Register:

Stevens helped usher Iowa State's program to national prominence. He scored 2,190 points, surpassed later by only Jeff Grayer, and led the 1984-85 team to the NCAA Tournament - the program's first trip since 1944.

Stevens was honored with a moment of silence before Wednesday night's game against Colorado at Hilton Coliseum.

"I always wanted to be a player like him," Hoiberg said Wednesday. "It's a very sad day for anyone associated with Iowa State basketball."

Stevens was a captain in 1984-85 when Iowa State turned the corner, reaching the NCAA Tournament and finishing 21-13. He averaged 21.7 points per game as a senior after scoring at a 22.2-point clip as a junior.