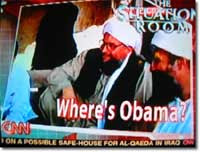 What started out as a nice Bush-bashing piece for CNN on the failed hunt to for Osama Bin Laden, turned ugly when a staffer misplaced the terrorist mastermind's name with that of Obama - as in Barack Obama.

CNN quickly issued an apology and of course no one believes it was intentional. In fact, other than the headline, I won't make any jokes either, because while I might disagree politically with Obama he is and never will be a terrorist. I will even dare to say I have a certain level of respect for Mr. Obama. Oh sure, I believe some of the Democrats' policies to border on terrorism, but...wait...scratch that...I said no jokes.

Of course if you are looking for humor a simple typo isn't nearly as funny as what Sen. Ted Kennedy said a year ago:

"Why don't we just ask Osama bin -- Osama Obama -- Obama what -- since he won by such a big amount. Seriously, Senator Obama is really unique and special."

No wonder the Democrats are so clueless when it comes to terrorism... Sen. Kennedy, a senior leader, can't even tell the difference between a terrorist and a member of their own party. Alright...alright...I'll quit while I am behind.

Others commenting: Doug Powers [thanks for the YouTube link]
Posted by Jeremie Jordan