Today's Forecast For The Areas In And Around Harry Reid: Mostly Deceitful, With Trace Amounts Of Truth 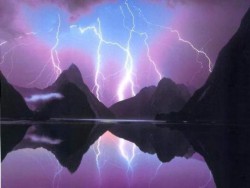 In A Word Meteorologists are predicting large amounts of lighting in the vicinity of Senator Harry Reid (D-NV) today. It appears a fast moving front of truth is starting to collide slow moving smoke screen of lies being pandered by the DNC and their chair Howard Dean.

Watch as these next few time lapsed quotes from an Associated Press story show just how strong the political storm is:

The activities _ detailed in billing records and correspondence obtained by The Associated Press _ are far more extensive than previously disclosed. They occurred over three years as Reid collected nearly $68,000 in donations from Abramoff's firm, lobbying partners and clients.

Reid's office acknowledged Thursday having "routine contacts" with Abramoff's lobbying partners and intervening on some government matters _ such as blocking some tribal casinos _ in ways Abramoff's clients might have deemed helpful. But it said none of his actions were affected by donations or done for Abramoff.

Reid also intervened on government matters at least five times in ways helpful to Abramoff's tribal clients, once opposing legislation on the Senate floor and four times sending letters pressing the Bush administration on tribal issues. Reid collected donations around the time of each action

It should noted however that the strength of this political storm is attempted to be offset by another front moving in behind it. My DD is reporting the impending fallout is just a ruse by the RNC to "smear" the always honorable Harry Reid.

Checking the latest headlines at Yahoo! News a few minutes ago, I was shocked to read that "Reid Aided Abramoff Clients, Records Show." Immediately, I clicked on it to get the story. My first impression was that, unless I wanted to be a complete and total hypocrite, I'd better post a criticism of Harry Reid, and fast. After all, if the leader of the Senate Democrats was indeed caught red-handed doing Jack Abramoff's bidding, we'd need to immediately marginalize him so as to not lose the upper hand in a debate about lobbying, ethics, and bribery. But as I started to read the article, I smelled a smear.
The story totally lost credibility for me when it got to mentioning the Marianas Islands. By now, you're probably aware of the fact that one of Abramoff's pet projects was maintaining a low minimum wage in U.S. territories not subject to the federal minimum wage. This was of interest to the Republicans because manufacturers could exploit the territories' low wages to essentially create a sweatshop environment without completely having to leave America.

The kicker, of course, is that for all of their effort, Reid never supported the Abramoff position. The very definition of "quid pro quo" is "this for that." In politics, this means something valuable like money or gifts for a politician's votes or some other form of official support. In this case, though Reid or his staffers may have taken meetings on the subject, it never amounted to anything

Of course, the "though Reid of his staffers may have taken meeting on the on subject, it never amounted to anything," completely ignores the AP story's quote of:

Reid also intervened on government matters at least five times in ways helpful to Abramoff's tribal clients, once opposing legislation on the Senate floor and four times sending letters pressing the Bush administration on tribal issues. Reid collected donations around the time of each action.

And while it my be true Reid did not support Abramoff's position on the Marianas Islands, we can't be too sure now can we? Especially in light of the obvious "quid pro quo" for the tribal issues Reid supported in kind for the generous donations made by Abramoff.

In A Word believes the MyDD counter-storm to be weak and feeble, however we are advising you to stock up on army boots...because my friends, the Reid cover-up for this latest revelation, is going to make the shit very deep.
Posted by Jeremie Jordan