...And These Are The People Who Are Suppose To Be Reporting The News? 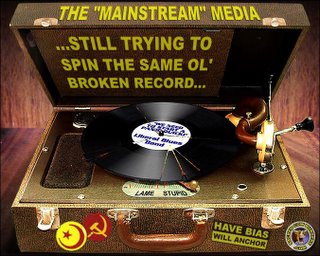 The press has resorted to whining, because the average American doesn't agree that Cheney's hunting accident is worthy of so much media attention.

Of course, it goes without saying that the mainstream media believes America's apathy towards the shooting to be Bush's fault:

"Of course they succeed,"” Milbank said of Bush aides. "“The press always looks awful. They will once again make us look awful."

CNN's Candy Crowley added: "The perception is that we're whining."

White House correspondent Bill Plante of CBS agreed. "The vice president and the White House have both used the constant press coverage of this story as a wedge,"” he told RELIABLE SOURCES host Howard Kurtz. "It plays to the prejudices of the people who are predisposed not to like us, and it's one way to distract attention from what happened."

Then Candy Crowley threw a temper tantrum and stomped out of the room, Dana Milbank threatened to hold her breath until America saw things her way, and Bill Plante called everyone a "big poo-poo head " and stuck out his tongue.

"It plays to the prejudices of the people who are predisposed not to like us." Surely the press wouldn't "play to prejudices of people" to distract attenti-.