God, Please Forgive For Talking About Cindy Sheehan On My Blog Yet Again 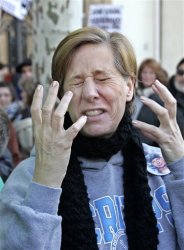 As you all know I am a regular reader of MichaelMoore.com. I find it insightful and generally amusing how he is always proving the Republicans wrong. I use Michael Moore.com to learn about how the Bush administration is corrupting America and ruining our way of life. Put quite simply...Michael Moore is my hero.

Oh sure, you snicker. You say, but "Jordan what about all the anti-Democrat propaganda on In A Word?" A smoke screen. I have been playing the roll of conservative to sucker in all the wingnuts. Now that the daily visitor levels have achieved a satisfactory level, I will now start to unleashing the sinister phase 2 of my evil plan...

To that end I have copied a letter from Cindy Sheehan taken from MichaelMoore.com detailing the horrible treatment and arrest by the Capitol security force:

As most of you have probably heard, I was arrested before the State of the Union Address tonight.

I am speechless with fury at what happened and with grief over what we have lost in our country. Namely my freedom.

There have been lies from the police and distortions by the press (Shocker), and simply not enough Cindy. So this is what really happened:

After being briefed by the nice people at the Washington D.C. branch of Moveon.org, I accompanied congresswomen Barbara Lee, who was the one who invited me to the State of the Union address, to the Capitol building. Just before we left a very friendly young man at Moveon.org came over and "reminded" me it would be "cold" in the Capitol chambers and I should cover up my 2,245 Dead T-shirt with a "warmer" plain T-shirt.

After taking the underground tunnel to the Capitol building we had to go through security. I let him take his time searching me. In fact, I went through the security line a second time to allow them to double check me just to make sure I wasn't hiding any dangerous weapons, because that is just the kind of American I am.

When we arrived at our seats, I excused myself to go to the "little protesters" room to finish what the security guard had started and take a dump. While in the bathroom I removed the plain T-shirt the nice Moveon.org staffer had given me and returned to my seat.

Upon reaching my seat again I was confronted by security and taken away to Guantanamo Bay. They said my T-shirt was in violation of an unwritten rule stating no "wacko, bi-polar puppets of wingnut organizations shall not be permitted in the Capitol chambers during the President's address." I claimed I was just a guest of Barbara Lee, to which the security guard said "close enough."

I doesn't need to be said, but my arrest was a direct censorship of my Constitutional right as granted to me by the 18th amendment.

It was at the time of my arrest that the emotions all hit me at once. I had lost my son, my husband, my country, my 18th amendment, and my lucky Darth Vader Pez dispenser. Oh, America where have you gone? I started to cry in pain.

After putting on one of my best crying performances of my career, I was released. With the help of great Americans like Michael Moore we have been able to secure a bunch of talk show interviews. Michael even said he might been able to extend my 15 minutes of fame to about 16 or 17, but in doing so I would have to sell him my soul. Of course, I agreed out of a desire to honor my fallen son, Casper.

I just wanted to write a letter to all my friend(s) and supporter(s), just to let you know you can't always believe what you read in the press. I wanted to let you know my side of the story as presented by MichaelMoore.com with limited commercial interruptions.