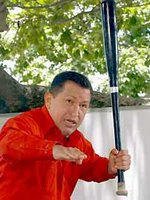 I would like to thank the Democrats and whacked out liberals who have succeed in making Venezuelan "President," Hugo Chavez [pitured in a defensive posture against attacks from the US], think he is actually important. No one cared about the embattled South American country which Chavez is personally destroying through his Marxist policies, but thanks to useful idiots like Cindy Sheehan, Pat Robertson [although not liberal, but whacked out none the less] and Harry Belafonte, this two-bit Dictator now has a world stage for his moronic rhetoric:

"The imperialist, genocidal, fascist attitude of the U.S. president has no limits. I think Hitler would be like a suckling baby next to George W. Bush."

"I ask for permission ... to buy another cargo of arms because the gringos want us unarmed. We have to defend our fatherland."

The freakshow that is Chavez couldn't be more right. I know for a fact here in Iowa we have set up our own little Auschwitz nuzzled discreetly among the cornfields. I mean, for crying out loud, just look at the levels of Jews and minorities in Iowa; we are obviously doing something in Iowa to keep those percentages low.

The point is this: the only reason we hear about Hugo Chavez now, is because the liberal celebrities of this country have embraced him as an antithesis to Bush.

And those celebrities and liberal talking heads that don't denounce Chavez when he compares an American President to Hitler, are only further dividing our nation. Every time someone compares the GOP to the Nazis, they are by extension calling me a Nazi too, because I voted Republican. Screw that. This is In A Word's great, big...FUCK you to all the low life pond scum, that insist on fear pandering by comparing history's worst homicidal dictator to Bush merely for a political gain in a mid-term election year.

A few words of caution though: be careful who you decide to sleep with, because waking up next to Hugo Chavez might just create illegitimate relations which will haunt you for the rest of your life. Kind of like herpes.
Posted by Jeremie Jordan