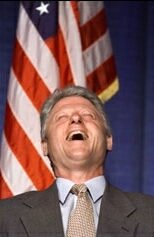 Dan Rather believes Bill Clinton to be a honest man..

Bill O'Reilly: "I want to ask you flat out, do you think President Clinton is a honest man?"

O'Reilly: "Even though he lied to Jim Lehrer's face about the Lewinsky case?"

Rather: "Who among us has not lied about something?"

O'Reilly: "Well, I don't lie to anybody's face on national television. I don't think you have, have you?"

O'Reilly: "How can you say he's a honest guy then?"

Ready for the punch line...

Rather: "Well, because I think he is. I think at core he's a honest person. I know you have a different view. I know that you consider it sort of astonishing anybody would say so, but I think you can be a honest person and lie about any number of things."

You "can be a honest person and lie about about any number of things." No, technically you can't Mr. Rather. Honesty is defined by Webster's dictionary as "free from fraud." Lie is defined as "to make a false statement."

And this man lead the CBS news department and the thoughts of millions of Americans for decades. Sure, O'Reilly is biased, but the O'Reilly Factor is a show about opinions, Rather was suppose to be telling us the facts. Trust no one in the press. You should also go to the O'Reilly Factor transcripts for this show to make sure I am not lying to you. However, understand I, unlike Mr. Rather, do not believe you can tell a lie and still be considered honest.
Posted by Jeremie Jordan